Jefferson County, Alabama commissioners voted by 4-1 to file bankruptcy. It will be the largest Chapter 9 bankruptcy in the United States and affects over $3 billion in municipal bonds. The process will start with hearings soon. We have written about the ongoing turmoil in Jefferson County in the past. Is this a surprise? Absolutely not.

The municipal bond market has been expecting this for some time. For the past three years this situation has been deteriorating. Its roots involve a sewer system grossly expanded under federal mandate, and corruption among county officials. It also involves the downgrade of municipal bond insurers in 2008, which caused the county’s many ill-advised swaps to skyrocket in interest costs.

Through much of the summer and fall, Jefferson County has been trying, to no avail, to negotiate a haircut on the principal of their bonds. With $3 billion involved, there will be some effects, mainly on lower-rated debt, but the market has been prepared for this. Most market participants were hoping that something could be worked out. The Governor of Alabama, Robert Bentley, had been trying to forge a solution between bondholders and the county. This solution would have included bonds backed by the state, but would also have resulted in much higher sewer fees in the county. The bankruptcy action may be an impetus toward crafting a solution.

Where have Jefferson County bonds been trading?

We expect to see little market impact on trading in Jefferson County bonds. The county has refunded most of its fixed-rate sewer debt with VRDBs and ARS in 2002 and 2003. The trades we have seen and local dealer quotes have been at high interest-rate levels. Participants most affected are the Letter of Credit banks that hold the failed remarketed debt and bond insurers, not bondholders. And with the Chapter 9 filing, we would expect to see more trading in the bonds.

What does Jefferson County do next?

They need to demonstrate to the bankruptcy judge that they cannot pay their bills. The judge will then determine what obligations they must fulfill, and at what level. JPMorgan, as well as the bond insurers FGIC and Syncora (formerly XLCA), face the largest losses.

Does this morph into a Meredith Whitney-like falloff?

We think not. Jefferson County has been developing for over three years. This is a result that almost happened in September. It was staved off by tentative settlements with creditors that did not get legislative approvals. Municipal bankruptcies are running at about 30% of last year’s totals. Problems such as Harrisburg, PA and Central Falls, RI have been known for a while; they represent specific mismanagement. Furthermore, the improvement in municipal credit this year has been very good.

Through the courtesy of our friends at Raymond James, we show two graphs: 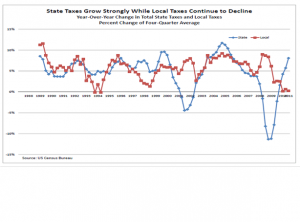 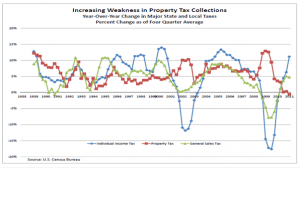 The first shows year-over-year changes in state and local taxes. The other shows specific tax revenue changes. You can see the strong rebound in state taxes, which are now back to pre-financial-crisis levels after seven quarters of gains (following five quarters of declines). Growth in local taxes – specifically property taxes – has been falling but held up better than other types of taxes when the recession hit, as it does in most recessions. The overall municipal market has rebounded smartly in the past nine months.

We will stay abreast of the next developments.

New Jersey’s  American Dream Mall has been shut since March, and mutual funds that bought municipal bonds backing its construction have since taken hundreds of millions of dollars in paper…

BondView’s CEO Robert Kane, was quoted in  “Ignites” regarding bond fund liquidity problems related to the COVID-19 economic impact.  When the liquidity in fixed-income markets “dried up” in mid-March 2020, …